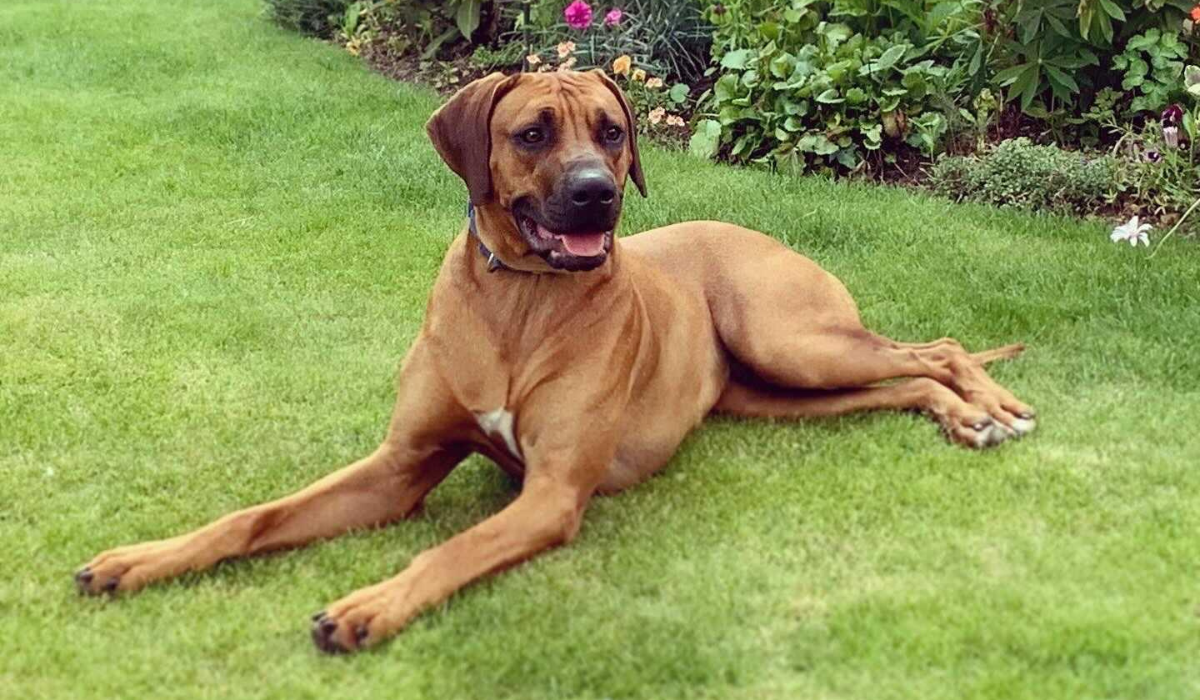 The Rhodesian Ridgeback is historically a hunting dog breed, used to distract lions in Southern Africa - woof! This pawsome lion dog is now a well regarded family pet who is very watchful and protective of his humans (regular dog sitters included). That said, they aren’t vocal dogs and after a thorough run around, Ridgies will forget their size and be ready for a big cuddle and snooze on the sofa. These dogs are not for the faint hearted when out walking - they are large, strong and love to explore - but, according to owners in our community, soft as butter at home. 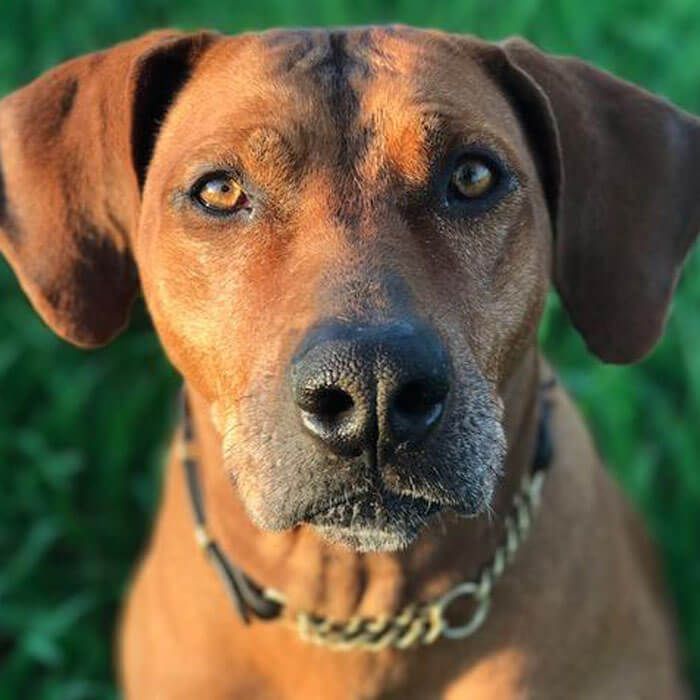 What is a Rhodesian Ridgeback dog?

Rhodesian Ridgebacks can be recognised by their tall, athletic stature and distinctive ‘ridge’ of hair along their light or reddish brown backs. They have a boxy head, sometimes with darker hair around the nose, and look alert and strong. For the untrained eye, they could be mistaken for the similarly tall but more narrowly built Hungarian Vizsla.

The doggy official name for the Ridgeback’s type of colouring is ‘wheaten’, a colour resembling that of wheat. For Rhodesian Ridgebacks, the colour can range from a light wheaten to red wheaten. The Ridgeback’s ‘ridge’ is a characteristic that must be shown to be recognised by Kennel Clubs - it runs from the shoulder to the hip along the dog’s spine and is essentially the hair growing from back to front. 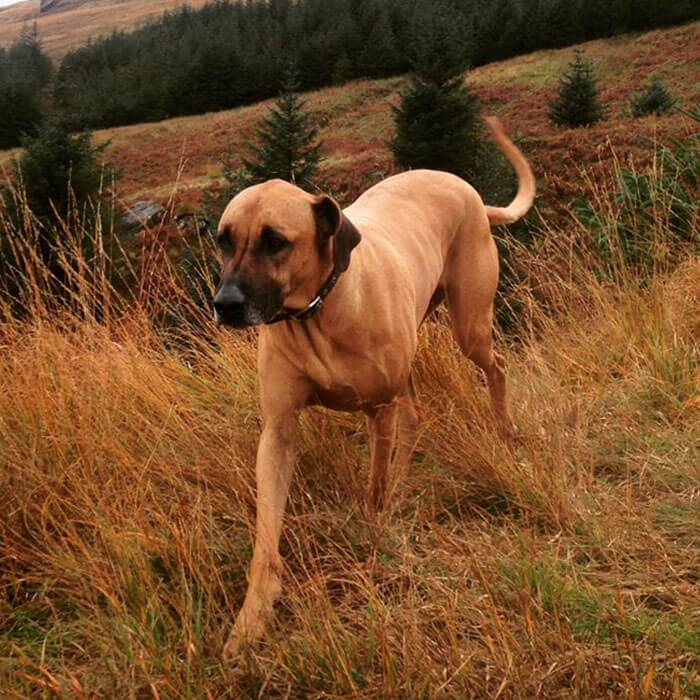 Blue, owned by Alice, “loves food and sniffing about the countryside on walks”

Rhodesian Ridgebacks originate from Southern Africa and the breed standard was developed in Zimbabwe (formerly known as Rhodesia), hence their name. Their ancestry (and the famous ridge) is linked to ancient hunting dogs owned by pastoralist nomads in the region (the Khoikhoi, in particular).

There are two other breeds with a similar subtle mohican - the Thai Ridgeback and the Phu Quoc Ridgeback - both of which originate from Asia. The genetic relationship between the three types is the subject of some doggy debate.

Legend has it that the ridge of hair is a sign of courage - and Ridgebacks are certainly known for being brave. Sometimes referred to as the ‘lion dog breed’ or the African Lion Dog, modern Rhodesian Ridgebacks are descended from hunting dogs used to chase down and hold off lions while they waited for their human companions to catch up (and finish the job…).

They also have strong guarding skills and are very faithful to their family. 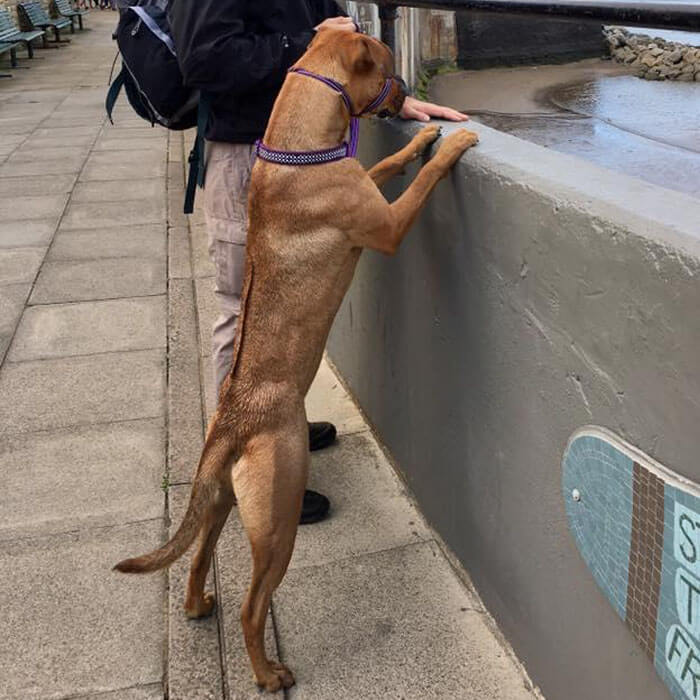 Shannon, owner of doggy member Ellie, has captured a good snap of the Rhodesian Ridgeback’s size and the characteristic ridge of hair

Rhodesian Ridgebacks are large - they usually weigh around 30 - 35kg and are 60 - 70 cm at the withers (the highest point on the dog’s back, near the neck). Their lifespan is usually over 10 years.

How much exercise does a Rhodesian Ridgeback need?

These doggies will need a lot of exercise to keep them content - more than two hours a day is recommended by the UK Kennel Club. They will be happiest in an active home with lots of time outdoors to stretch those long legs. That said, once Rhodesian Ridgebacks have had a good run around, they tend to be relaxed and cuddly around the house.

Stuart, from Northampton, gives a good overview of his aptly named Ridgeback, Dino:

“Dino loves to walk in the local parks and woods off lead. He likes to sniff about and chase the odd squirrel (he never stands a chance!). He more often than not walks by your side, unless he is stretching his legs and running around in circles. He likes to play with other dogs if they let him. When at home Dino spends most of his time ‘resting’. As long he has somewhere comfortable to curl up with a human by his side he is happy.” 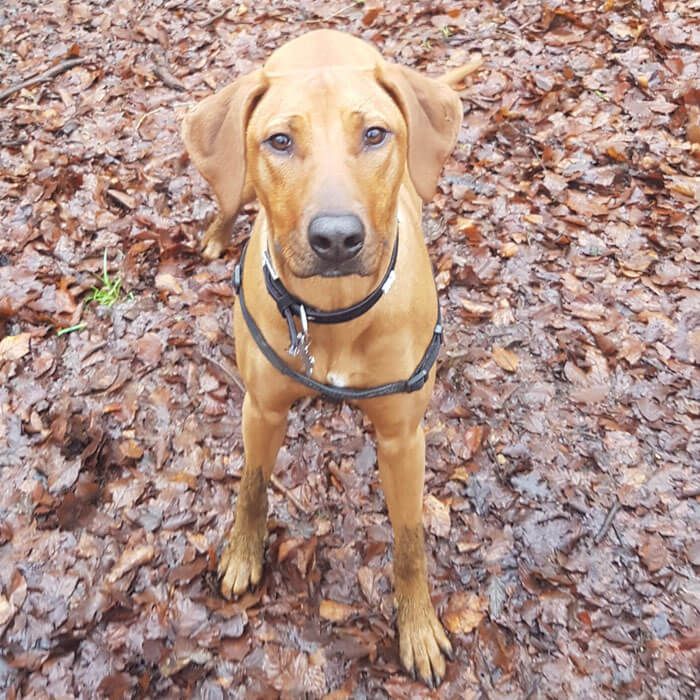 Doggy member, Riley, from Scotland “loves long walks in the park and lots of playtime” and “cuddles next to you on the couch”.

What is the Rhodesian Ridgeback’s temperament?

Given their links to keeping lions at bay, Ridgies are predictably confident dogs. They are loyal to their owners and can be aloof around strangers, although they are not aggressive and are known to be very sweet at home. Owners in the BorrowMyDoggy community describe them as cuddly, friendly and good around children. Despite this soft side, as they are large, loyal and very faithful to their families, they can also be very good guard dogs.

Woody, owned by Sue, seems to encapsulate the softest version of the lion dog:

“he loves to be out on walks but if he sees another dog he can't help but run to them to play! Sometimes other smaller dogs are a bit scared but he's the softest dog I've had! If another dog runs up to him whether big or small he will run away he's that soft! He loves tug of war and being close to you.”

Alfie is a Rhodesian Ridgeback with a Spaniel best friend. Their owner, Dan, says:

“They both love people, other dogs and children. Alfie is very strong but both are good on a lead. Both love to run around but are just as happy snoozing by the fire! Jasper likes to fetch sticks while Alfie prefers to eat them!!” 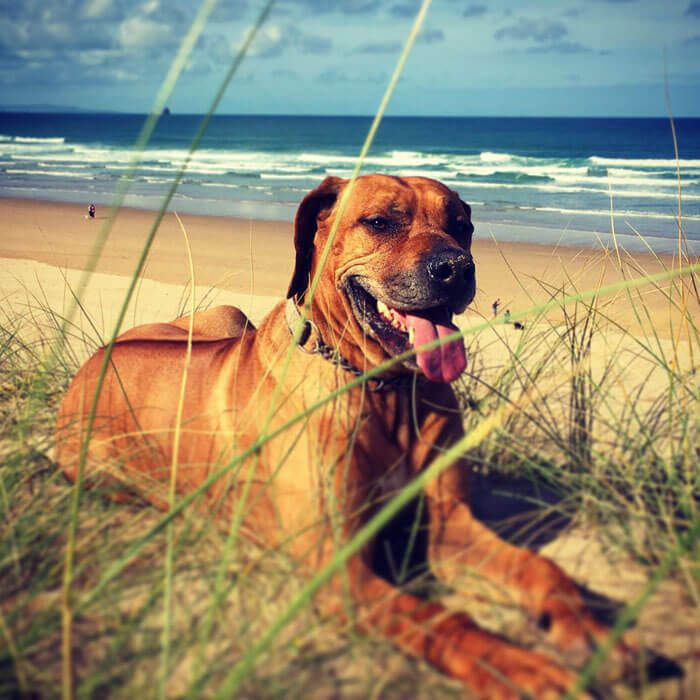 Training: are Ridgebacks easy to train?

Rhodesian Ridgebacks have regularly been described as obedient and intelligent by owners in the BorrowMyDoggy community and as very good family dogs.

However, their large size means that (if untrained) they can be difficult to handle as they can become very strong and as such are better suited to more experienced homes. If well trained, they can make good guard dogs.

Ridgies are also likely to have a strong instinct to explore (remember they used to seek out lions!) and so working on recall will be very important before any walks off the lead.

As with most dogs, pawsitive reinforcement and consistency from a young age is important to get good results from training. It is also important to socialise Ridgebacks from a young age so they learn to play appropriately with other dogs (as they may not be aware of their size!) and to ensure they get along with any other family pets. 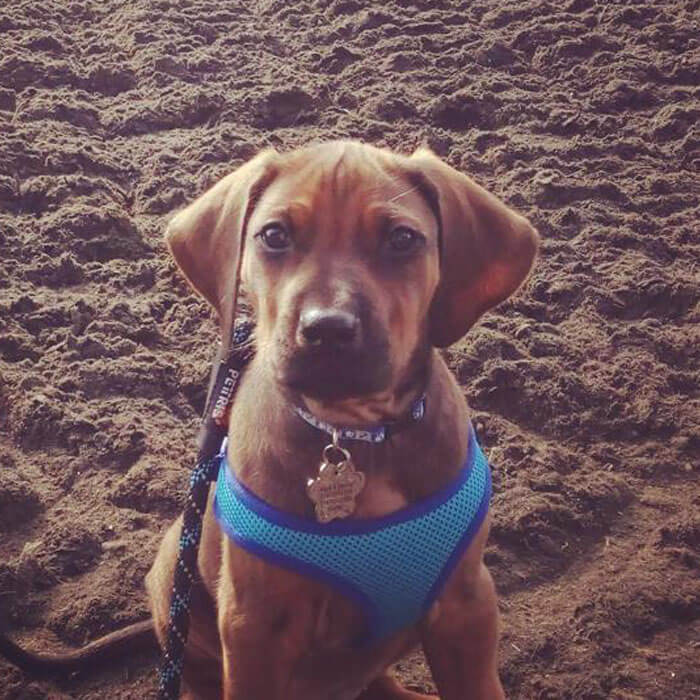 Rusty the Rhodesian Ridgeback puppy, who “knows all of his basic commands” and is “very good with recall for his age but we keep him on a long leash just to be sure for now”, according to his owner Mark. Good boy, Rusty!

One more tip - if you’re looking for a running buddy, Ridgies are a top choice. Check out this video for our top 5 dogs to run with 🏃🐕

High paws to our lovely community for letting us share these facts about their Rhodesian Ridgebacks. Paws crossed all the information has been helpful :)

Now you know all about the breed and have learnt about some of the BorrowMyDoggy Ridgies, we have some questions for you!

BorrowMyDoggy is unlike other dog walking companies - it is a community focused on sharing the love of dogs - see our testimonials to learn more.

Why not join the BorrowMyDoggy community today?