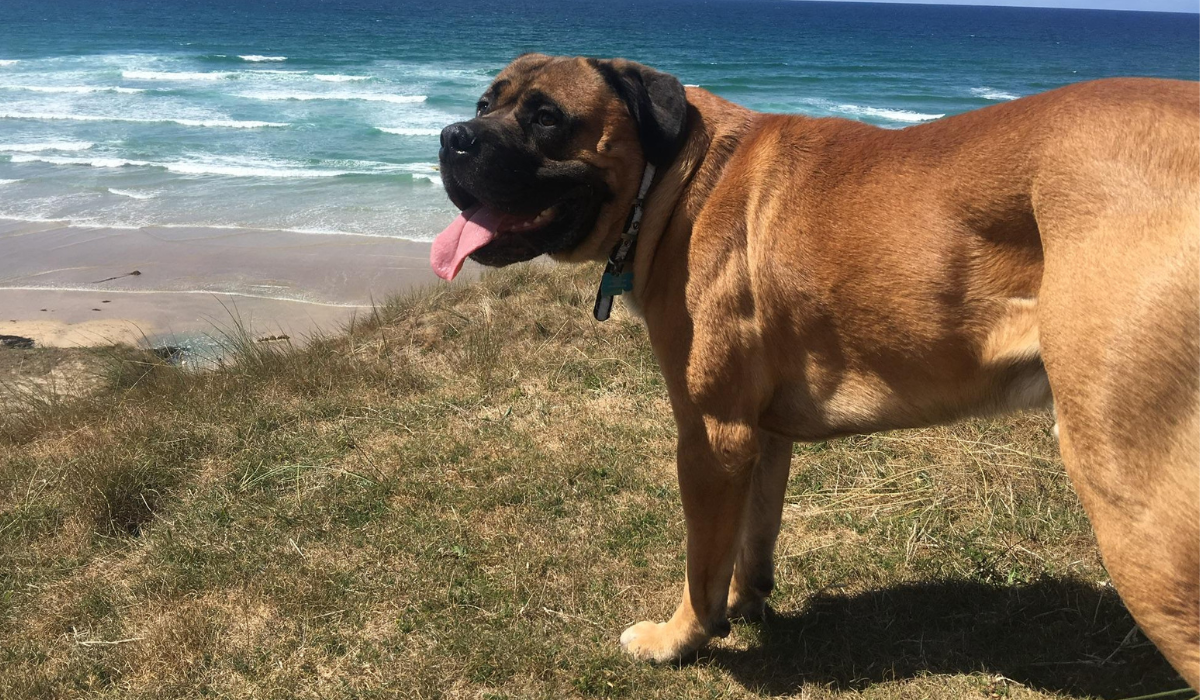 The Bullmastiff: a fearless guard dog transformed into a soppy pet. Bullmastiffs may scare off intruders with their imposing size but, in the home, they are big cuddly softies who love nothing more than their family. Regardless of whether you’re an owner or a borrower, if you want to learn all about the Bullmastiff breed and read some Bullmastiff stories from the BorrowMyDoggy community, you’ve come to the right place. 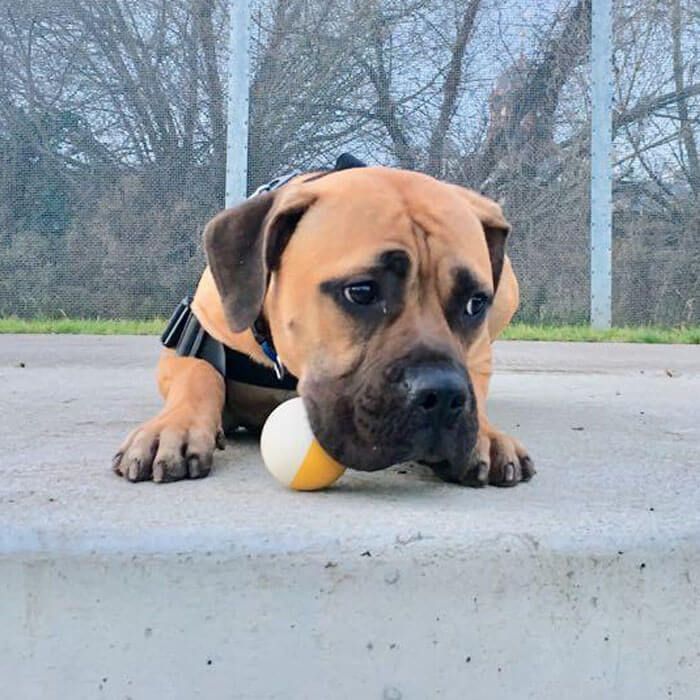 What is a Bullmastiff dog?

The Bullmastiff is a very large dog breed originally bred by gamekeepers to guard estates from poachers. Bullmastiffs usually reach around 60 - 70 cm tall at the withers and weigh between 45 - 60 kg. A Bullmastiff’s lifespan is usually under 10 years, according to the UK Kennel Club.

The breed was developed by breeding old English Bulldogs (now extinct) with the English Mastiff, hence it’s similar appearance to other Mastiffs, such as the Cane Corso (or Italian Mastiff) and the Dogue de Bordeaux (or French Mastiff). Combining the two breeds resulted in a large, strong and courageous guard dog.

Some thoughts on Bullmastiffs from owners in the BorrowMyDoggy community...

Tina describes her Bullmastiff, Bear as:

a very a loveable giant.

"He loves kisses and cuddles and despite his size will sit on your lap. He loves the outdoors and walks in the country and playing tug of war. He's very friendly to children and other dogs. He gets a little over excited on meeting people and can jump up, so needs somebody strong to control his over excitement.”

Dobby the brindle Bullmastiff, as described by his owner:

Dobby will do anything for a treat of any kind. He loves sitting on your lap and having his face rubbed. He's happiest when he's cuddled up under his duvet or eating! 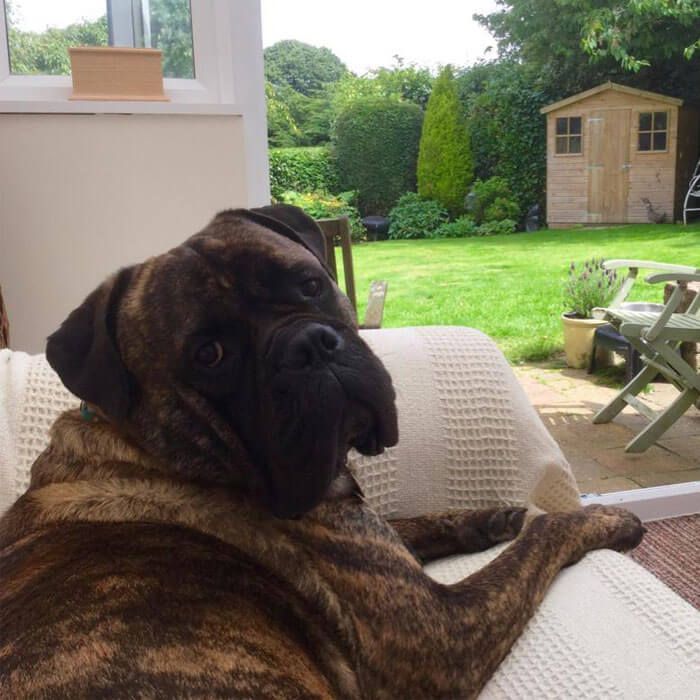 A brindle Bullmastiff, Daisy, described by her owner as a “cuddle monster”

How much exercise does a Bullmastiff need?

The UK Kennel Club recommends more than two hours’ exercise per day for Bullmastiffs. Our Bullmastiff owning members report varying energy levels, however, and Bullmastiffs have made it into our top 5 laziest dogs - they often love a snuggle just as much as a plod around the park. It will be important that a Bullmastiff gets enough exercise, even if they are a little unenthusiastic, to avoid becoming overweight and putting extra pressure on their joints and bones.

Like all young pups, Bullmastiff puppies should be exercised carefully, with duration and intensity of exercise being built up slowly to allow their joints to develop properly.

Probably a good reason for looking into dog sitters or alternatives to doggy day care to avoid any long days alone in the house. 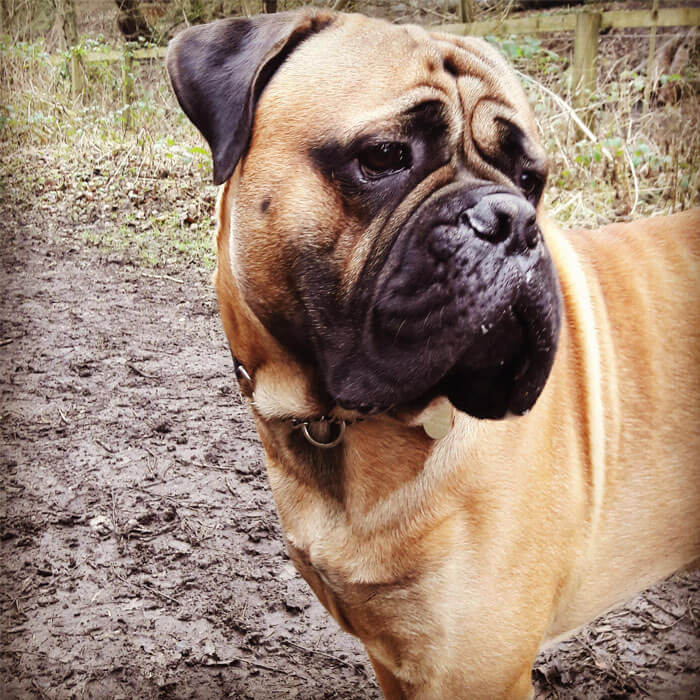 What is the Bullmastiff’s temperament?

Bullmastiffs are described as courageous, lovable, friendly and affectionate. The American Bullmastiff Association describes Bullmastiffs as “possessive, territorial, loyal dogs with an innate sense of who does and who doesn’t belong on one’s property”. That said, they are also “fearless and confident, yet docile. The dog combines the reliability, intelligence, and willingness to please required in a dependable family companion and protector.”

Therefore, the typical Bullmastiff should be socialised from a young age to try and prevent unwanted woofing at visitors to the family home - they are just trying to guard, but it could make life difficult for the postman or friends dropping in. To make the most of this lovable giant’s soppy temperament, training from a young age (and a high garden fence) will be important.

According to owner members, Laura and Ruth, it sounds like Ziggy and Norman have the typical Bullmastiff temperament:

Ziggy is a big soppy girl!

"She loves tearing around after other dogs but gets tired quickly and never catches them! She is very affectionate and loves any attention. She likes to guard the family but will very quickly accept new friends."

“Norman is a huge loveable boy.

"His favourite thing is having his tummy rubbed. He is pretty mild and docile and affectionate. He is great fun to run around with on the green. He is extremely agile and playful and is a joy to watch playing with his doggy friends” 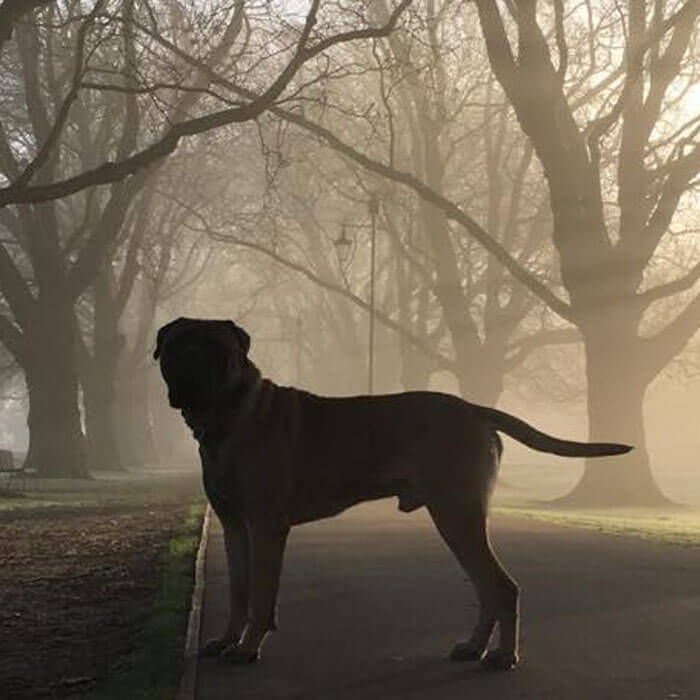 Bullmastiff training: are they easy to train?

Bullmastiffs should be relatively easy to train if training is started at a young age and continued consistently.

An important theme arising in literature around Bullmastiff training is the need for the owner (or borrower) to be respected and known as the dog’s leader. Given the Bullmastiff’s size and predisposition for guarding, if left untrained, the breed can become unruly, difficult and could knock people over.

That said, Bullmastiffs react very well to having a purpose and knowing who’s boss. Obedience classes are a very good way to ensure Bullmastiff puppies are socialised and trained to understand basic dog commands. Training should also take place at home to ensure they know their place in the family pecking order. Treats and pawsitive reinforcement should help ensure Bullmastiffs are engaged and ready to please.

Do you have a Bullmastiff that plays deaf?

Check out this Hound Hack on improving recall:

High paws to our lovely community for letting us share these facts about their Bullmastiffs. Paws crossed you found them helpful :)